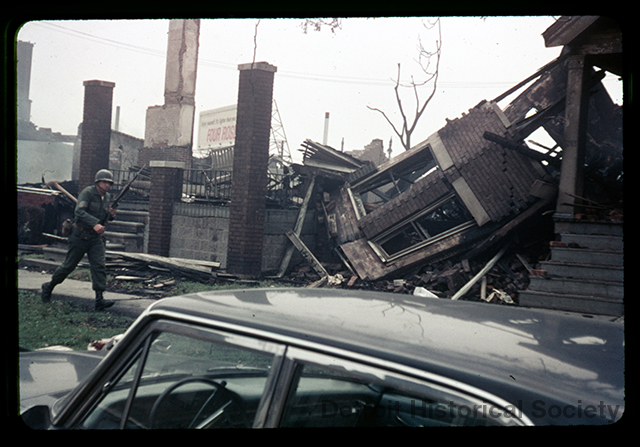 Posted at 10:14h in contributor by DHS Contributor
Share

In the summer of 1967, Detroit experienced one of the worst civil disturbances in United States history. The conflict, decades in the making, shaped Detroit’s history over the next 50 years, impacting race relations, economics, neighborhoods and national perceptions about the city. Tensions with law enforcement boiled over and thousands of people took to the streets, with looting, arson, and gunfire rampant over the course of days.

While few completely understand what happened, why it happened, or how it continues to affect the city today, Detroit 67, Origins, Impacts, Legacies provides critical context and helps dispel misinformation and myths that have persisted for 50 years. Was it a riot, rebellion or revolution? The book, edited by historian Joel Stone explores each perspective.

Detroit 67, Origins, Impacts, Legacies begins with colonial slavery along the Detroit River and culminates with an examination of the state of race relations today and suggestions for the future. Twenty contributors, from well-known journalists like Tim Kiska, Bill McGraw, and Desiree Cooper to historians like DeWitt S. Dykes, Danielle L. McGuire, and Kevin Boyle, have individually created a rich body of work on Detroit and race.Detroit 1967 aims to correct fallacies surrounding the events that took place and led up to the summer of 1967 in Detroit, and to encourage informed discussion around this topic.