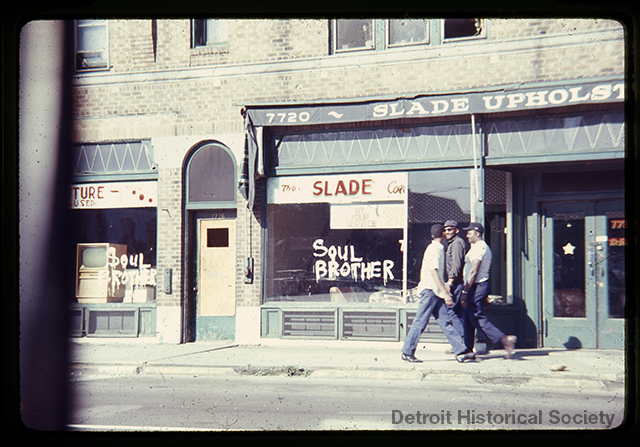 Posted at 18:00h in contributor by DHS Contributor
Share

In his piece entitled, “Anarchy and Ashes,” HOUR Detroit’s Richard Bak looks at the downfall of what was supposed to be the shining Model City for the country.

“It all began in the pre-dawn hours of Sunday, July 23, 1967, the start to another scorching summer day. The 10th Precinct vice squad conducted a routine raid on an after-hours joint above the Economy Printing Company at 12th Street and Clairmount Avenue. They expected to find 15 or 20 people inside the blind pig. Instead there were more than 80 partygoers celebrating the homecoming of two soldiers back from Vietnam. A call went out for paddy wagons to transport the revelers.”

What started with paddy wagons turned into Michigan State Police, the Michigan National Guard [including Detroit Tiger’s pitcher Mickey Lolich] and two airborne divisions from the U.S. Army. Bak recounts how the five days wore on.

“All Sunday the rioting spread through the west side — along 14th Street, Linwood, Dexter, Grand River, Livernois — with looting and fires breaking out on the east side around Mack and Van Dyke. Local black leaders, including U.S. Rep. John Conyers and City Councilman Nicholas Hood, were jeered and run off when they tried to calm rioters.”