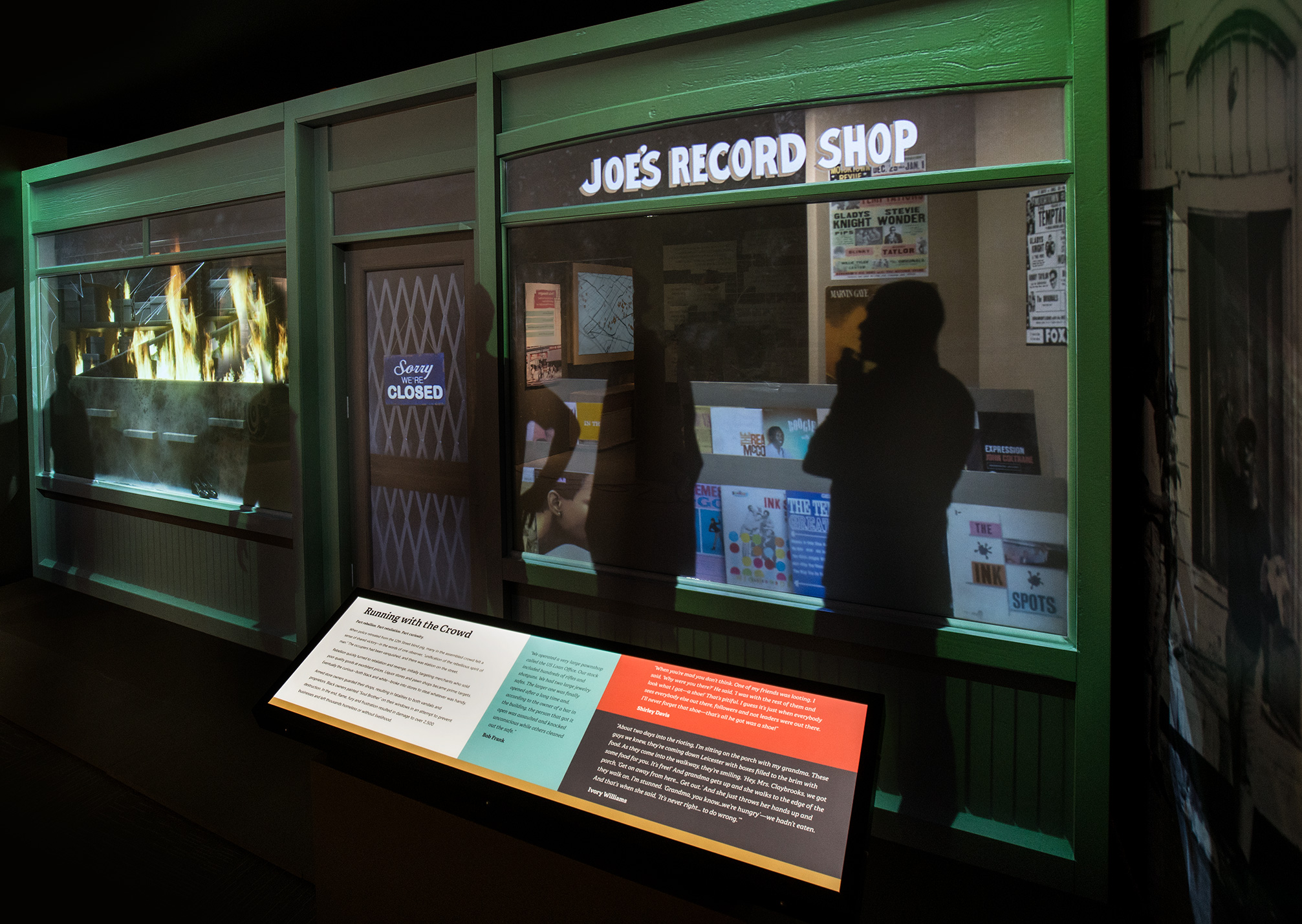 Any longtime resident of Southeast Michigan has a story about the Summer of 1967 and the infamous events that escalated to a citywide state of civil disobedience, known alternately as the Detroit Riots and the Detroit Rebellion. This divergence in naming is just one way of underscoring that everyone’s perspectives on causes and conditions of that long, hot week in July of 1967 are different, and that histories and recollections are worth revisiting.

So, when the Detroit Historical Society began working on a community engagement program that would launch with the 50-year anniversary of the civil unrest that occurred that July—Detroit 67: Looking Back to Move Forward—they picked a rather different approach than one usually sees with a history museum.

“We built it in a much different way than we’ve ever built any exhibit before,” said Rebecca Salminen Witt, who began her tenure as Chief Development and Communications Officer for the Detroit Historical Society in January of this year, of the exhibit Perspectives. “Most historical institutions are good at delving deep into history, finding out what the facts tell us, building something around it, and then inviting people to it. Instead, we reached out widely into the community, collecting stories from—at this point—almost 500 people, listened to those stories, and gleaned from it what people remembered most, what was most important to those memories, what was different about those memories—kind of how the multiple perspectives of the events formed how they thought about it. And then we built the exhibit around those ideas.”

The results are an exhibition dense with information. The actual events of the summer of ’67 make up the middle portion of the space, bracketed on either side by 50-year histories. The exhibition begins with a timeline of factors dating back to 1917 that1 contributed to the social climate in 1967. These stories can be accessed online, and are also displayed within a listening kiosk in the exhibit. They constitute the most comprehensive archive amassed on the topic anywhere.

“One of the questions in the oral histories, or something that naturally came up was: ‘Why do you think this happened? What was your family history that led you here?’” said Salminen Witt.

Causes and conditions include the northern migration of a Southern black workforce moving toward the promise of jobs in automotive factories, while also moving away from crushing racism in the post-Reconstruction South; rapidly shifting demographics within many Midwestern cities, which touched off race riots in numerous places besides Detroit; stringent campaigns of police action, trying to tamp down certain communities; and Eminent Domain land seizures and public infrastructure projects that razed some of Detroit’s most thriving black communities and businesses. The preponderance of evidence and stories paint 1967 Detroit as a powder keg, with any spark holding the potential to ignite the city.

The spark was, of course, an early-morning raid of a returning veteran’s party at a “blind pig,” or after-hours bar, on July 23rd, during which a number of onlookers began to protest, and a series of violent arrests took place. The incident could not be contained, and civil unrest spread through the city over the next several days, finally culminating in the dispatching of the National Guard to enforce a military state on the streets of Detroit and control the rioting and looting that was literally tearing the city to pieces. 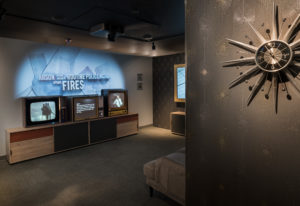 Within the exhibition, the blind pig is represented as a rather unassuming door display, but the real revelation of the action takes place in a mock living room set—designed to emulate the very place that most Metro Detroiters heard about these events in the first place. Activated by a motion sensor, a phone rings as visitors enter the living room. When answered, series of recordings of people calling home to inform their loved ones play. A series of old tube televisions slowly buzz to life, and their programming converts to real news coverage, which is then synchronized to a wall display showing the spread of incidents throughout the city. Visitors convene in this area—children gathered by the phone, waiting for it to ring, a father on the couch, watching TV—in a contemporary portrait very much like what must have been happening in living rooms across and around the city.

This is followed by an animated storefront installation, where a display of shoes in a shoe store become overlaid by an animation of the store being looted—as well as the adjoining property, Joe’s Record Shop, which was the business owned by Joe Battle, father to one of Detroit’s most prominent writers and oral historians, Marsha Music. On an adjacent wall, you can see a blown up picture of the crowd amassed (rather orderly, it seems) outside Joe’s Records, waiting for their turn to loot. To the left is a reinterpretation of a tank, with the interior side cut away to house a theater.

“The museum has 250,000 objects in its collection,” said Salminen Witt, “so we could have filled this place up with objects, but what was important was to really lift up those stories, and just use objects in a way that reinforced them. So we were careful about that. But this [tank] is a huge part of the exhibition and the experiential components, obviously, and the reason was that every single person who had a memory, just about, had a memory of this.” Accompanied by a short animated rendering are six different memories, plucked from the oral histories, that relate directly to the experience of military-dispatched tanks on the streets of Detroit.

The other end of the exhibition represents the 50 years of post-1967 history in a section that Salminen Witt says may continue to change during the three-year run of the show. An adjacent gallery houses a much needed conversation space, where people can reflect on the exhibition, digest the impact these events made throughout the region, and place their visions for Detroit’s future in a “half-century box.”

“Those are one of the most important outcomes of this exhibition,” said Salminen Witt. “The hashtag I’ve been using is #keeptalking, and they’re conversations that make you uncomfortable a lot of the time, because they put you at a table with people you don’t know—but that’s what needs to happen in the next 50 years if we’re going to end up in a different space. If we would have been having these conversations for the last 50 years, imagine what Detroit would be like right now.”