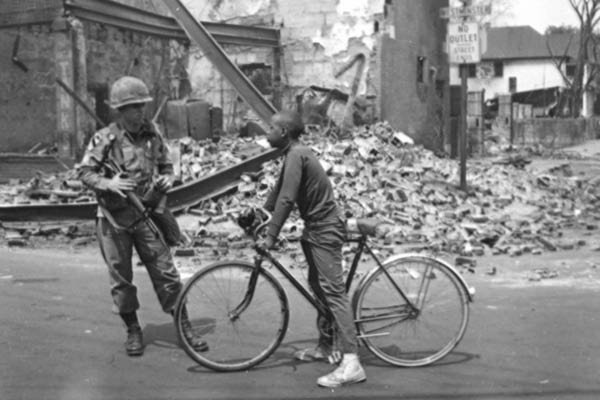 14 Jul How Detroit got Detroited

Posted at 12:01h in News by Detroit Historical Society
Share

When I moved to Detroit in 1984, the long shadow of the 1967 rebellion was still palpable. The crack epidemic was full throttle and car jacking was a new crime (the term was actually coined in Detroit). The murder and teen crime rates were the highest in the nation. The city was in the middle of another recession. It was the year that 800 fires raged before Halloween and Devil’s Night was born. It’s now 50 years after the rebellion and, despite the astounding proof of life downtown, its ravages are still evident.

Between 1967 and 1968, many American cities boiled over. From Newark to Plainfield to Englewood, it seemed the entire state of New Jersey was rioting. Los Angeles, Minneapolis, New York, Chicago – all of them experienced terrifying, devastating riots, but none were memorialized with a verb like “Detroited.”

(In the Urban Dictionary, “Detroited” means: “1. Something broken beyond repair; 2. When sections of a city are closed off and then leveled.” In case that’s not clear, the dictionary includes the hashtags: #destroyed #obliterated #ruined #defeated #finished.)

Why was Detroit the only city that was so completely crushed after its rebellion?

To be fair, Detroit’s rebellion was the most destructive and deadly, making it a difficult milestone to transcend: 2,509 buildings were damaged, 7,231 men and women were arrested and, most horrifically, 43 people died. That’s not easy to recover from even if, by some miracle, industry, private investment and federal policy had collaborated to rebuild.

But that didn’t happen. And instead, there was nearly complete abandonment by the white power structure in the years preceding and following the rebellion. There are lots of reasons why, but there were three factors that sealed the Motor City’s fate: the integration of unions, the influence of Marxism and the emergence of Black Power.

Unions were always about protecting the jobs of white males. It was in Detroit that the integration of the unions gained significant ground. That rankled more than the captains of industry; it didn’t sit well with white workers, either. (A case in point: the 1943 walkout at the Packard Motor Company, when 25,000 workers walked out rather than work next to three blacks on the assembly line.)

Blacks in Detroit demanded the integration of the unions and formed a political structure to achieve it. The influential Trade Union Leadership Council preceded the rebellion, and organizations like the Dodge Revolutionary Union Movement and the League of Revolutionary Black Workers formed in the aftermath. Together, they brought the voice of black workers to the shop floor and to the bargaining table.

The integration of the unions co-existed with a strong Marxist movement that thrived in the black community in the 1950s and ’60s. Indeed, some of the city’s most legendary black, political and community leaders were Marxists, from Kenneth Cockrel Sr. to Jimmy and Grace Lee Boggs.

On the heels of the rebellion, a third complicating layer emerged: The rise of Detroit as a center for the Black Power movement. Although they were a distinct minority faction, black nationalist organizations – including The Republic of New Afrika founded in 1968, followed by the powerful Shrine of the Black Madonna in 1969 – thrived in Detroit and pushed their political agenda.

Perhaps all could have been forgiven by the white power structure, but for the final nail in the coffin: The election of Mayor Coleman A. Young in 1974. Young was the embodiment of all three forces: union integration, communism and Black Power.

When hauled in front of the House Un-American Activities Committee in 1952, Young evaded questions about his connection with communism and instead leveled accusations of racism against his inquisitors. His heroic performance launched his political career. By 1964, he was elected to the Michigan Senate and within 10 years, he was Detroit’s mayor.

For African-Americans, Young was a symbol of black political empowerment and leader who would address all of the ills that continued to fester after the rebellion. By the time Young became mayor, his politics had moderated, and he was surprisingly chummy with many of the city’s business leaders. But he also championed Black Power, politics and entrepreneurship. His election was a clear signal that Detroiters were not going to quietly re-embrace white the status quo. For that, there would be no forgiveness.

If it was black anger that set fire to the city in 1967, it’s been white retribution that’s been burning ever since. That’s how Detroit got Detroited.

Desiree Cooper is a contributor to Detroit 1967, a NEW collection of essays about the rebellion from Wayne State University Press.