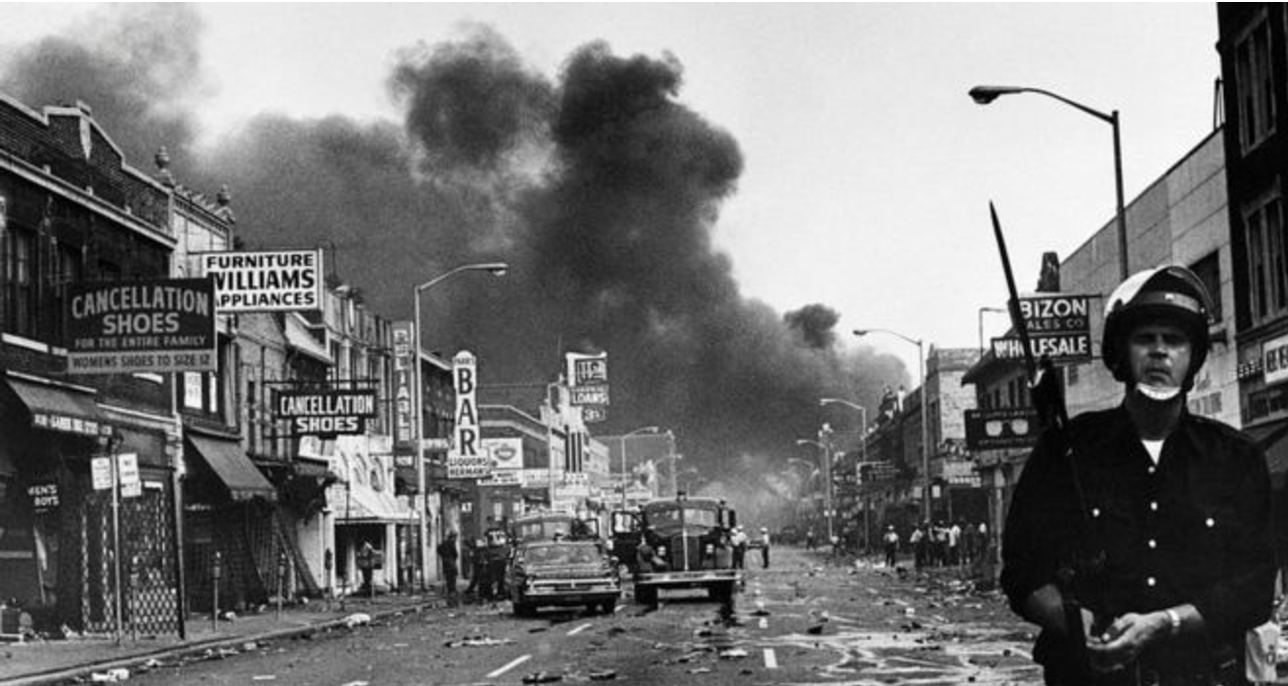 Posted at 11:57h in Uncategorized by Detroit Historical Society
Share

Darryle Buchanan was approaching his 12th birthday when he awoke on the morning of 23 July 1967 to the sounds of what appeared to be a raucous party outside.

As the young altar boy rose from his bed and ironed his cassocks that Sunday morning, preparing for duty at St Agnes Catholic Church, he could smell smoke.

“I thought people must be barbecuing or something,” he recalled.

The phone rang and his mother, an emergency room technician who worked an overnight shift, called to tell her son to stay put.

Fewer than 10 blocks away, Detroit was beginning to burn.

A city in flames

Fifty years ago and five days before Mr Buchanan’s birthday, police raided an after-hours African-American blind pig, or an unlicensed drinking and gambling club, and arrested 82 people in the middle of the night.

The incident touched off civil unrest across Detroit over the next five days, prompting Michigan Governor George Romney to deploy the National Guard and eventually President Lyndon Johnson to send troops from the US Army’s 82nd and 101st Airborne Division to quell the violence.

Once the dust settled, 43 people were dead, 1,000 were injured and more than 7,000 were arrested – many of whom were African-American – in what seemed like a warzone to the rest of the country.

The subject is the focus of Oscar-winning director Kathryn Bigelow’s forthcoming film Detroit, which centres on a single incident at the Algiers Motel during that week of violence.

Police fatally shot three black teens at point-blank range and beat other black men while looking for snipers at the motel.

Only one officer faced trial for the shootings and was acquitted by an all-white jury – a refrain that has continued in recent years amid a national debate on excessive use of police force.

Mr Buchanan spent the next week watching as the 12th Street neighbourhood – once a bustling business and commercial district – became engulfed in chaos, destroyed brick by brick.

“People were coming down the street with shopping carts and things in their hands,” he recalled of that first morning.

“I actually saw a guy run from the meat market across 12th Street with a side of beef on his back,” he says with a chuckle. “I for one didn’t know what he was going to do with it because you gotta have the right carving tools for that, but that’s just how insane it was.”

Mr Buchanan remembers sweaty nights sleeping beneath his grandparents’ dining room table that week, peering out the window as police raided the building next door and watching looters burn down a dry cleaners as he stood across the street.

“When the building collapsed through the floor, there was this rush of cool air that came out of the basement that you could feel change in the intensity of the heat,” he says.

“These rats were on fire, running down on 12th Street, as the whole thing came down.

“When a building catches fire it doesn’t smell like a bonfire or paper burning. It is a smell like after an earthquake or something, that smell of decay. And that lingered because the rubble just sat there.”

The devastation included more than $50m (£38m) in damages and reduced more than 2,000 buildings to piles of smouldering ashes, plunging the one-time Model City into a downward spiral of poverty and blight.

During the stifling temperatures of the summer of 1967, known elsewhere as the Summer of Love, civil unrest erupted across nearly 130 cities across the country – but Detroit would mark the bloodiest and its scars would run deep for decades to come.

The golden age of a Model City

Detroit 67: Looking Back to Move Forward, is a three-year project spanning the 50 years before and after 1967, including oral histories from hundreds of locals and former residents.

“We’ve had some victories and we’ve had a lot of failures,” he says. “But it’s important for us to look at our collective history no matter where we are and understand how it intersects with our lives.”

Detroit was among several cities to receive millions in federal funding for urban development as its booming economy attracted thousands of workers to the centre of the automobile industry.

“Detroit was really this shining city on a hill in terms of racial harmony,” says Jeffrey Horner, a Wayne State University urban studies and planning senior lecturer who is teaching a course on the events.

The city, home to the three largest US carmakers, brimmed with wealth and boasted more than 90% of the car market after World War Two.

“Detroit had this amazing history before the riots, but it was this 10-year period of time where city’s fortunes completely reversed,” Mr Horner says.

For many, the blind pig arrests marked the final straw in the black community’s long-simmering frustrations with economic strife, housing discrimination and racial tensions with a predominantly white police force.

By 1967, African-Americans made up just 5% of the police force, but roughly 40% of the population.

The 1967 crisis has been described as riots, with hundreds of locals taking part in burning buildings, ransacking local businesses and widespread violence.

Of the 43 people killed, 33 were African-American and 10 were white, including a police officer, two firefighters and a National Guardsman.

But the disorder has also been called a rebellion, underscoring long-standing economic and racial frustrations among the city’s large black community amid a period of urban renewal.

“The timber was dry that weekend,” says Mr Horner. “It should have been no surprise to anybody in the black community but I think there is almost unanimity this took the white power base in the city completely by surprise.”

The chaos on the streets was indeed met by shock from city officials and police, who were overwhelmed by the violence and required both state and federal help to put an end to the volatility.

Mr Horner is among those who refer to the unrest as a rebellion, titling his class The 1967 Rebellion: Retrospect and Prospect.

He says his research shows that the black community was “entirely morally justified” in rebellion against its mistreatment.

“These were very disenfranchised people and people who were being treated as second-class citizens,” he says. “But I don’t think there was any justification for the horrible outcomes and loss of lives and loss of property.

“It really turned the city upside down and in many respects the city hasn’t recovered from it, but as far as the rebellion occurring in the first place, I think it was justified.”

Ike McKinnon, a former police chief and deputy mayor, was one of the few African-American police officers on duty as the unrest roiled Detroit.

He was driving home after a long shift when he was pulled over by two white officers, he recalled in the Detroit 67 project.

Still dressed in uniform, Mr McKinnon was ordered to get out of his car, where one of the officers pointed a gun in his face and said: “Tonight you’re going to die, nigger.”

Mr McKinnon said he saw the officer begin to pull the trigger, then he dived back into his car and took off as they open fire.

“So that was a sad reality to me that here we had these two police officers who shot at me, and it hit me in terms of, if they shot at me, a fellow police officer, what are they going to do to other people in the street, the city?” he said.

Before the unrest, Stella Heatley, a British nanny from Suffolk who worked for the British Council in nearby Grosse Pointe Park from 1966 to 1969, recalls the thrill of taking a bus downtown to shop at department stores, never concerned for her safety.

“It was really a pleasant life. We really didn’t think anything about it,” she says of how she spent her days as a nanny. But then came the outbreak of violence and her sense of well-being changed.

“The riots really put a stop to going downtown with the same sense of security.”

Mrs Heatley, who permanently returned to Detroit in 1973 after marrying her American husband, Henry, remembers hearing about the violence a day after the police raid.

She received a phone call from the Council to pack a bag and to be ready to leave, possibly by boat, on Monday afternoon.

The family remained, but Mrs Heatley remembers watching television images of plumes of smoke billowing from the streets.

“There was a media blackout so it was about a week before the full gravity of the damage done became clear to the general public,” she says.

“People were genuinely alarmed that if it started there it could continue elsewhere. There was a fear,” she added, “an apprehension.”

The fear was palpable – and it hung over the city, Mrs Heatley says.

“People literally left in the next few weeks because they weren’t sure of what would happen, what the impact on immediate future of the city would be and they were afraid, in some cases, for the children going to school,” she says. “They just didn’t feel safe.”

The city’s population would indeed shrink from 1.8 million people, at its peak in 1950 as the country’s fifth largest city, to just 672,000 people today.

The Twelfth Street business district never recovered after 1967, leading many of the buildings to fall into a state of disrepair and shop owners to abandon the area.

“I felt this sense of loss that the community I knew was never going to be the same. And it wasn’t,” Mr Buchanan says.

The events also exacerbated the white flight of the middle class to the suburbs, which began in the 1950s, starving the city of tax revenue and ultimately leading to the decline of Detroit’s public schools.

But the unrest is also a reminder to residents of the community leadership that rose from the ashes of 1967, with the creation of several organisations including New Detroit and Focus: HOPE.

Some of those community-driven changes served as the city’s backbone as it endured the following decades of economic turmoil, Mr Horner points out, including the so-called Great Recession of the late 2000s, the near collapse of the car industry and Detroit’s historic declaration of municipal bankruptcy in 2013.

“The community development movement was a very important link between city government and residents, to the extent that it spurred discussion amongst stakeholders and groups such as aggrieved citizens,” he says.

“Just the fact that there’s a lot more talking going on now than there was in 1967 is an important lesson.”

These lessons are more important than ever as the city undertakes a massive revitalisation effort, accelerated by young entrepreneurs returning to the city, Mr Stoudamire says.

“Detroit is not a blank canvas. You don’t build on top or around people, you build with people,” he says.

“That’s why we’re trying to use this as a catalyst to move forward. Our identity doesn’t need to be recalibrated, but our stories need to be told.”