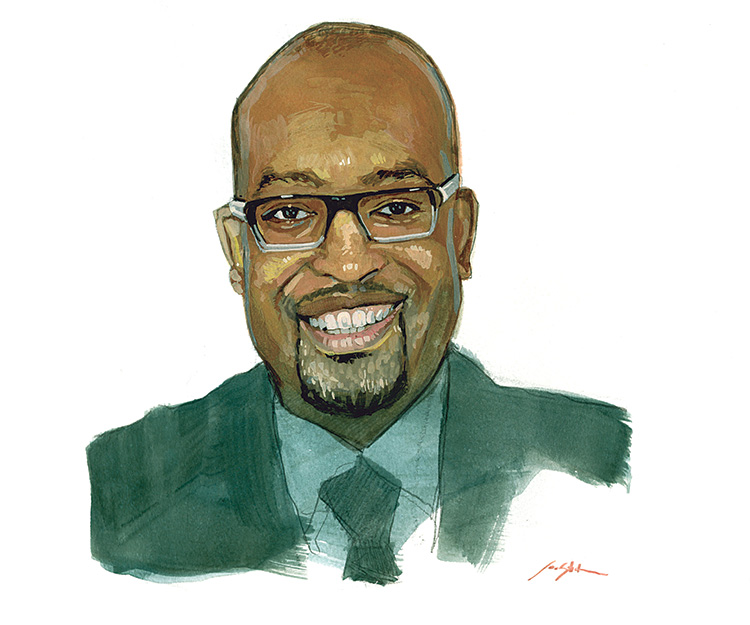 31 Mar An Hour With… Marlowe Stoudamire

Posted at 04:05h in News by Detroit Historical Society
Share

We speak to the Detroit 67 Project Director

Marlowe Stoudamire: There’s no one truth here. … We’ve landed on “five days of civil unrest.” Other occurrences around the country (then) were referred to as “riots” by a certain segment of our population. (But) the people who were living it have a totally different perspective. We do say (it) was not a “race riot.” That was 1943. (If) we give perspective around what led up to (1967), talk about what’s happened 50 years after, and have a (vision) for 2067, people will define it on their own. We want people to understand why it matters more than what to call it.

The “Looking Back to Move Forward” tagline?

You can’t move forward without understanding where we’ve been, especially when you think about all these new Detroiters, this new momentum that’s kicking in. … (But) some statistics show that conditions aren’t any better right now. What are we doing (to ensure) those who still may be disenfranchised do not get left behind?

People didn’t just wake up one day and say, “I’m pissed off.” … The blind pig raid was the straw that broke the camel’s back. (If) we were in perfect harmony … it wouldn’t have sparked what was already building up in the community.

To use ’67 as a way to memorialize, revitalize, and help us move forward. There are four key imperatives. One: We need to really start paying attention to the level of (economic) inclusion and opportunity. Two, and this is unavoidable: Race is still an issue. … We have to start creating those dialogues and building bridges. Three: Youth development/leadership. Looking ahead to 2067, youth have to … take ownership of their environment. Four: How do we advance neighborhoods?

A story this big takes everybody to tell it. (We’re seeking) stories from those who didn’t live in Detroit but witnessed it from afar … those who decided to leave … those who decided to stay — there are so many different stories. This is not finger-pointing (at) those who left. But they need to (understand) what their leaving contributed to … how it may not be as simple for the kid at Six and Gratiot to just strap up his bootstraps. … There may be roadblocks and barriers. … Whether you’re sitting on your front porch or in a C Suite making decisions on millions of dollars, what’s your role in helping Detroit move forward?

What have we learned?

This is also … America’s story. I know that sounds very cliché. … Pay attention to what’s happening in Flint. The whole country is going to have a lot of issues with infrastructure.

When I was in elementary, we couldn’t (use) the fountains.

I grew up at Six and Gratiot.

I once lived on Young.

My school was literally around the corner. They tore it down. … William Robinson Elementary.

Very high-tech, high-touch, (and) activating all five senses. I want people to feel like they’re not in a museum. … We’re going to create a space for people to reflect and kind of decompress on what they just saw. … We’re not going to kick people out into the gift store after they go through this intense experience.

A book is in the works?

Local historians like Ken Coleman (are) going to own different chapters. … We’re trying to take ownership of our own narrative. The worst thing that can happen is the New York Times be the lead dog on this.

Right. The national pundits and media … do what they do. Our job is to … make sure it’s not the only narrative. … It’s everybody’s story. Not new Detroit and old Detroit, but our Detroit. We want to make sure there’s an opportunity for people … who are normally not heard (or) feel marginalized. … To make sure those who have a responsibility to listen are listening. We want to give people a chance to participate in … setting the tone for the next 50 years. We want to connect people to opportunities so they can take action, and actually have a level of utility and relevance in this rebirth. The worst thing you can do is have revitalization and rebirth going on around people. They need to feel like it matters.

82
People arrested in a predominantly black neighborhood at a “blind pig” (after hours club) on Twelfth Street and Clairmount Avenue.

5
Days the city was in turmoil. After the raid, a small group of African-Americans broke the windows of a nearby store. Large-scale violence quickly spread throughout the city.

48
Hours before the National Guard was mobilized, followed by United States Army troops. Tanks and machine guns were used to keep the peace.

43
People who died. Countless others were injured.

7,000-plus
Number of people arrested. The vast majority were African-American.

2,000-plus
Number of buildings burned down.

$40-$80 million
Estimated total cost of damage from arson and looting.