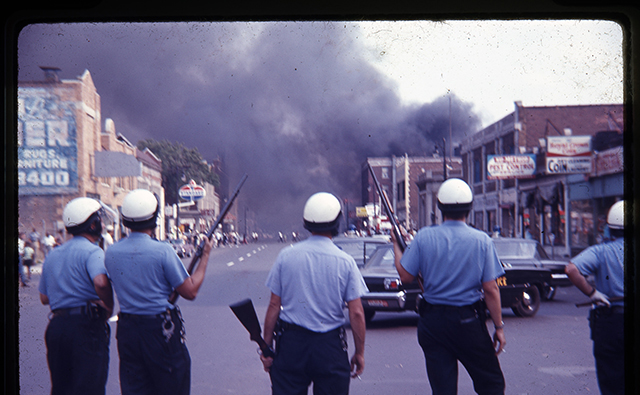 Posted at 19:41h in News by Detroit Historical Society
Share

Corporate and philanthropic leaders gathered at a Detroit Economic Club luncheon this week as part of the comprehensive Detroit Historical Society project, Detroit 67:Looking Back to MOVE Forward. A panel featuring W.K. Kellogg Foundation president and CEO La June Montgomery Tabron, PWC President Tim Ryan and Henry Ford Health System President Wright Lassiter discussed issues of economic opportunity, equity and neighborhood revitalization. The panel, moderated by Crain’s Detroit Business Editor and Publisher Ron Fournier examined lessons from the events leading up to the Summer of 1967 in Detroit, its impact on the present, and examined ways the business community can contribute to greater prosperity over the next fifty years.

“Monday’s Economic Club discussion was just one of many such panels, exhibits and discussions under way in Detroit as the 50th anniversary of the riot arrives later this month.

What may be the city’s main effort at remembrance and understanding, the exhibition at the Detroit Historical Museum titled “Detroit 1967: Perspectives,” is open to visitors and runs through 2019.

Recommendations from Monday’s panel included greater support for public education and for small neighborhood businesses. And Ryan suggested that open-ended discussions about race, such as the one he described in his firm, need to take place all the time, not just one day a year.

Failing greater progress, cities like Detroit that may think they’re looking at 1967 only through the rear-view mirror may find themselves facing even more tragic events ahead.

“I don’t think we have the luxury to fail twice in this effort,” Tabron said. “Coming back means coming back in every neighborhood and every family and every child in the city of Detroit.”

Detroit 67: Looking Back to Move Forward is a multi-year effort engaging thought leaders, scholars,
community partners, businesses, the nonprofit and policy community, and residents of all backgrounds to create a “call to action”  and serve as a catalyst for change. The comprehensive program includes: